Released in 2020, the Special Select Putter line includes 5 blade putters and 3 mid-mallet putters. In this overview, we’re looking at the new version of the classic Newport putter, and the updated Newport 2 and 2.5 versions.

Which Pros Use Scotty Cameron Putters?

Scotty Cameron putters have been used in over 40 major wins, including four of Tiger Woods’ five Masters wins and 15 of his majors (he briefly switched to a Nike putter before returning to a Scotty Cameron putter.) Here are just of the few players who have used one of his putters to win a major:

Originally, Scotty Cameron Putters were only custom designed for pro golfers. His putters first got attention when Bernhard Langer used one to win the 1993 Masters.

Cameron uses a technology called “The Art of Putting” to fit players. In 1996, the first Scotty Cameron Putter studio opened in San Diego, and the brand started out as being under contract by Titleist. He is a perfectionist at heart, and is constantly making small improvements to his product line based on feedback from tour players.

Scotty Cameron putters can be sent to his studio to customize features like the specialty grip, headcover, stamp, paintfill, shaft band and sight line.

The biggest change with this group of putters is that the stainless steel inlay (which had a softer feel, but less feedback) has been abandoned for the more traditional milled steel “one piece” head construction. The putter heads are hand-milled in California.

There are a few features that all three of these putters have in common. The most important ones are the tungsten weights, which give a balanced feel, a soft tri-sole where the center of head is soled at address for a smooth takeaway.

The Pistolini Plus Grip, which is preferred by tour players, is less tapered and more symmetrical for a better feel. All of these putter heads are mulled from 303 steel.

One of the newer features is that the putter used tungsten for the blades and stainless steel for the mid-mallets for improved stability. The putters all have a 3.5 degree loft and are available in three different sizes: 33, 34 and 35 inches. Now let’s look at some of the subtle differences between the Special Select Newport Blade Putters.

Differences Between the Special Select Putters

Besides a personal preference for the square or rounded style, you’ll also want to consider which style of neck (plumbed or slant) is best for your stroke.

A slant neck is face-balanced and suits a straight back straight through (SBST) stroke. In comparison, a plumbed neck with toe hang is better for an arc stroke.

The Newport putter is a refinement on a classic shape. It has curved lines with a thinner topline and a plumbed neck to improve sightlines at address. 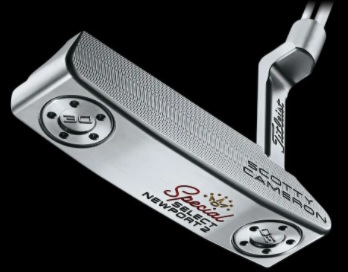 The Newport 2 is an Anser-2 style putter (meaning it has a hollowed out cavity in the back) with square lines and a thinner and flatter topline. The putter feel varies depending on the ball and it’s best for players who hit off the sweet spot, instead of the toe or heel. Read our GolfLink review of the Newport 2 putter.

This putter has a similar profile to the Newport 2. The main differences between the two putters is that the Newport 2.5 has a slant neck, larger sweet spot and more forgiveness.

How Much Do Scotty Cameron Putters Cost?

Since Scotty Cameron Putters are a tour level piece of equipment, they are an investment. These putters will last you for many years. Plus you get to be part of a historic brand that has been part of dozens of Major wins. All three putters are the same price at $399 USD each.

Amy Masand is a Junior Editor at GolfLink.